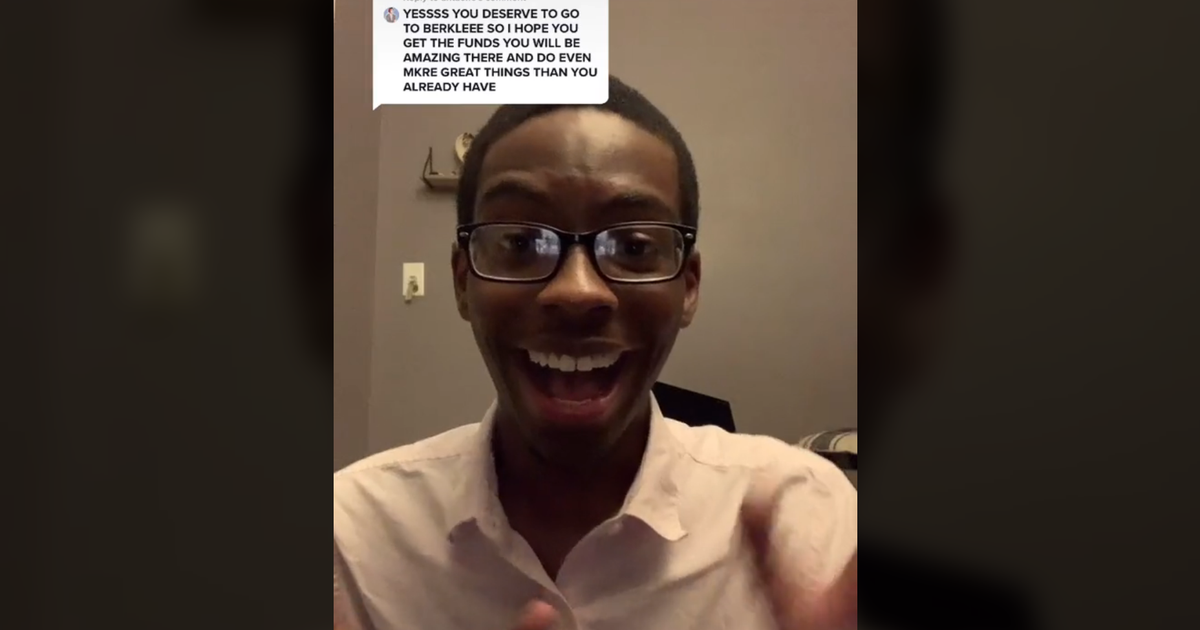 Let’s just get the obvious thing out of the way: It’s wrong at a fundamental level that anyone should feel the need to crowdsource the money they need to attend a top-tier college. The post-high school education industry is often fueled more by privilege than it is by talent or intelligence.

That doesn’t mean we shouldn’t cheer, though, when someone like 18-year-old Howard Godfrey, soon to be a high school graduate, gets to go to his college of choice thanks to the generosity of strangers on the internet.

Godfrey took to TikTok on Thursday to share his story: He’s a “singer, composer, and multi-instrumentalist” who has written four musicals (co-writing two of them). He’s also hoping to attend incredibly prestigious Berklee College of Music in Boston, which should open some future career doors for him in addition to providing a first-class education in his chosen field.

He posted the TikTok to spread the word about a GoFundMe he launched to help fund his education, since it’s “super expensive,” to use the young musician’s words. (And no joke, it really is. Just look at these tuition costs.)

He’s clearly not comfortable here, and who can blame him? Most people blanch at the thought of asking for money, and here Godfrey is aiming that request at total strangers. His TikTok post feels genuine and thoughtful for sure, but he also struggles to find the words for an appropriate sign-off at the end. Wouldn’t you?

Godfrey elaborates on his story in the GoFundMe description, noting that he’s one of four siblings in a single parent household, and he’s poised to become a first-generation college student within his family. So although his mother works full-time to support her four kids, it’s not enough to pay for a school like Berklee even after financial aid and scholarships are factored in.

As of Sunday morning, the GoFundMe total sits at $62,527 — well above the $50,000 goal. The comments feed is filled with scores of supportive messages. “Every young adult should have the chance to fulfill their dream through a great education!” one commenter writes.

A grateful and clearly emotional Godfrey returned to TikTok on Friday brimming with excitement as he thanked his GoFundMe benefactors.

“A little over a week ago I started a GoFundMe and shared it to Instagram, and in the first few days it raised like $20,000, which is absolutely crazy. Yesterday I decided to post to TikTok just to see what would happen, and in the past 24 hours you all have shown me so much love and so much support, it managed to raise an additional $33,000. And because of that I am literally able to go to school.”

We all love to see it here at Mashable. Especially with Godfrey’s two TikToks both underpinned by his own music. He worries in the first video that laying out all those things he can do — singer, composer, and multi-instrumentalist — comes off as “pretentious,” but that’s not how it lands here. It just sounds like you’re good at what you do and ready to take your schooling to a new place.

Congrats to you, Howard. Go follow that dream and make beautiful music.

Written By
admin
More from admin
On Sunday, the late actor Chadwick Boseman won the Golden Globe for...
Read More